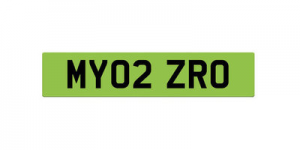 “Green cars” are to get corresponding license plates in an effort to boost electric car sales in Great Britain. The government’s proposal follows recommendations of their behavioural insights unit and aims to increase awareness of PEVs.

If the British government goes ahead with the suggestion, plug-in hybrid and electric vehicles could soon carry green number plates. Such signs are standard in Norway, Canada, India and China on electric vehicles.

They are making them both distinct and visible to other road users. Moreover, green number plates enable police and traffic wardens to decide at a glance whether a car is entitled to privileges such as priority parking or access to ultra low emission zones. This could be particularly useful once the ULEZ in cities like London will be expanded.

While the consultation is ongoing, the idea of green number plates has been deemed valid. Elisabeth Costa, director of the Behavioural Insights Team, an outlet partly owned by the government, said: “Simple changes based on behavioural science can have a big impact. Green plates would be more noticeable to road users, and this increased attraction can help normalise the idea of clean vehicles, highlighting the changing social norms around vehicle ownership.”

The Guardian quotes a spokesman for the Environmental Transport Association though, who believes green number plates to be just one side of the equation. He added that “to be truly effective any such initiative will need to at the same time shame the drivers of the most polluting vehicles; an electric or hydrogen-powered vehicle might sport a green plate, but the biggest gas guzzlers should have theirs branded red.”

Back to the green number plates – should the proposal go through, electric and other ultra-low emission vehicles may receive the special sign within a few years.

Meanwhile, an easer solution may be to follow the example of California. The state has been using simple green (PHEV) and white (ZEV) stickers for years.