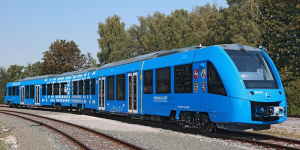 For now, the two Coradia iLint trains will refill at a mobile hydrogen station in form of a steel container standing next to the tracks at Bremervörde station. With one tank, they can run all day, thanks to a total range of 1,000 km. A stationary filling station on EVB premises is scheduled to go into operation in 2021, when Alstom will deliver a further 14 fuel cell trains to LNVG. The latter is the transport authority of the county and stands for Landesnahverkehrsgesellschaft Niedersachsen. Lower Saxony’s Ministry of Economy and Transport supported LNVG’s purchase of another 14 hydrogen trains with more than 81 million euros.

Considering plans for a fleet of a total of 16 fuel cell trains, Henri Poupart-Lafarge, Chairman and CEO of Alstom had every right to exclaim: “This is a revolution for Alstom and for the future of mobility.” The company says it is ready for serial production at their facility in Salzgitter. Moreover, Alstom says they signed letters of intent for 60 trains with other German states.

For LNVG chief Carmen Schwabl, whose authority organises the rail passenger transport between the North Sea and the Harz mountains and therefore pays annual compensation of around €300 million to Deutsche Bahn, fuel cell technology is a strategic decision. “We also do this because about 120 diesel trains in our vehicle pool will reach the end of their lifetime within the next 30 years, meaning we will have to replace them. The experience gained with this project helps us find a sustainable and practical solution.”

To make the deployment of the Coradia iLint possible for other operators as well, Alstom offers a complete package, consisting of the fuel cell train and maintenance, as well as the whole hydrogen infrastructure constructed by partners.

Update Monday 25 May 2020: Alstom reports that they have successfully completed trail operation with the above-mentioned two hydrogen trains. The trials were completed at the end of February clocking up 530 days of operation and more than 180,000 kilometres. The two pre-series trains of Alstom’s Coradia iLint model have been in passenger service since September 2018.

“Our two pre-series trains of the Coradia iLint have proven over the past year and a half that fuel cell technology can be used successfully in daily passenger service. This makes us an important driving force on the way to emission-free and sustainable mobility in rail transport”, comments Jörg Nikutta, Managing Director for Germany and Austria of Alstom Transport Deutschland GmbH. “We have also obtained valuable data from the trial operation of the fuel cell trains for the further development of the propulsion technology.”

The next trial phase will involve the refuelling of 14 hydrogen-powered Coradia iLint regional trains starting in 2022. The 14 emission-free trains will replace existing diesel trains, whereby Lower Saxony public transport provider LNVG has invested in the order of the 14 trains and thirty years of maintenance and power supply. Alstom will manufacture the fuel cell trains for LNVG and will carry out maintenance of the vehicles at its site in Salzgitter, Germany. For refuelling, Linde will build and operate a hydrogen filling station for the series trains near Bremervoerde station.