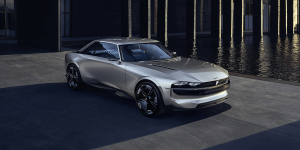 Peugeot has announced their e-Legend concept, which is a fully electric and autonomous homage to the popular Peugeot 504 Coupé. The premiere of the e-Legend will take place at the Paris Motor Show in early October.

Design director Gilles Vidal described the concept as follows: “A modern, sharper Coupé, this ultra-technological archetype of automotive pleasure finds its deep strength in the DNA of the Peugeot 504 Coupé.” The vehicle platform used as a basis for the e-Legend is a specially developed platform for concept vehicles. The design features a headlight setup reminiscent of older Peugeot models with a triple partition and two double modules. Almost the entire vehicle is made of carbon.

As much as the concept visually reminds us of the classic, it looks very different under the hood: A 340 kW motor with a maximum torque of 800 Nm accelerates from 0 to 100 km/h in less than four seconds. The top speed is limited to 220 km/h. A 100 kWh battery allows for a range of 600 km, according to WLTP standards. Charging the battery takes place through an inductive system, which can fully charge the vehicle sufficiently for a 500 km range within only 25 minutes.

The interior is designed to remind us of the 60s era with dark wood paneling, but breaks through with the odd modern design element, such as the sixteen screens of a variety of sizes mounted inside the vehicle. In part, they digitally represent interpretations of real materials, but also provide information to the driver and passengers. The highlight is a 49 inch screen under a soundbar, flanked by a 29 inch screen in each of the doors and 12 inch screens in the sun visors.

The manufacturers estimate that the components and technologies in the vehicle would be ready for manufacturing by 2025, according to Phillipe Emmanuel Jean, Peugeot’s head of concept car strategies.

While the PSA subsidiary will be presenting their new model at the Paris Motor Show, another subsidiary is ahead in their game: the premium brand DS is preparing to launch their DS 3 Crossback as a fully electric SUV in the second half of 2019.