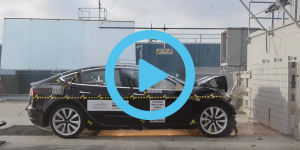 The Tesla Model 3 has received the highest recommendation from the US NHTSA for safety. Similarly impressive reviews had also been given to the Model X and Model S in the past.

It is not uncommon for vehicles to receive a five star rating from the US National Highway Traffic Safety Association, but to receive a perfect score in all sub-categories is quite an achievement. The following videos explain and show the Model 3’s behavior during various crash-test scenarios and safety tests:

The positive review comes at a time when the Model 3 sales are picking up: In the past two weeks alone, Tesla reportedly received 1,124 orders for the Performance Version alone.