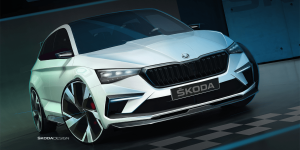 The Czech VW brand Škoda has announced plans to present the Vision RS concept at the Paris Motor Show beginning in early October. The concept is a plug-in hybrid with 180 kW system performance and a 70 km electric range.

Škoda has described the concept as an overview of the next development step for the athletic Škoda RS models and the design of a future compact vehicle. The design itself will also reflect the future direction for the Czech company. As another novelty, Škoda announced that material sourcing placed additional focus on using vegan materials as well as sustainable production methods.

The technical details for the concept are as follows: A 100 kW, 1.5 litre gasoline motor provides the major power, combined with a 75 kW electric motor. Combined, this makes for the 180 kW system performance mentioned above. The acceleration was stated to go from 0 to 100 km/h in 7.1 seconds. In total, the compact sports-car will not exceed 33 grams of CO2 per kilometre.