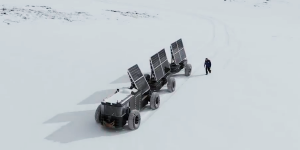 The plan started with a recycling initiative, before escalating to the fully functional vehicle we see today. The Clean2Antartica team states that the vehicle runs using solar power, for which a total of ten solar panels were installed on the lead tractor and the two trailers behind the lead vehicle. The panels power two batteries, with 10 KWh. The vehicle’s top speed is a mere 8 kph, however considering the vehicle weighs 1,485 kg and that it has to cross incredibly difficult terrain, this seems a fair trade-off.

The designers/manufacturers/pilots Liesbeth and Edwin ter Velde stated the following about their construction process on their Subreddit, where they have been documenting the process alongside a series of Youtube videos:

“We take plastic from the residual waste, sort it and melt it into the wire which then is taken to the 3-D printer. The printer then creates hexagon-shaped details which are put together like a puzzle to create the parts of the car. And the result is the fully-operating vehicle! It is only one step from seeing plastic as a waste to converting it into a useful resource which can be used in so many different and exciting ways!”

The Clean2Antarctica foundation will continue to document the process along the arduous and freezing (the driver’s cabin is not heated!) journey through the arctic summer on their website, and hope to prove the concept as a pilot project showing that trash is not always simply waste.

The Solar Voyager will start its journey in Antarctica this November.

A De Niro for e-Niro