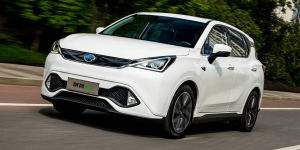 The electric SUV will start at 20,000 dollars (about 17,360 euros) in China once all subsidies have been applied. The Eupheme EV will initially be offered in twelve Chinese cities, including Beijing, Changsha, Guangzhou, Shenzhen, Hangzhou and Tianji with additional regional markets to be opened before the year’s end.

Mitsubishi and GAC that produce and trade together as GMMC consider the Eupheme EV a “milestone” especially for Mitsubishi’s operations in China.

The Eupheme electric car builds on the Eupheme PHEV. Manufacturer GMMC has an annual production capacity of over 270,000 units per year. They make the Mitsubishi ASX and Outlander SUVs, as well as the GAC Eupheme and now Eupheme EV and GMMC maintains over 300 stores across China.