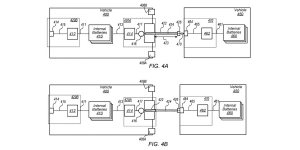 Apple has given up on project Titan that looked as if they were building their own electric car for a while. Now the Giga-Corporation filed for a patent that describes an electric car formation with a term from road cycling: Peloton.

The idea is for self-driving electric vehicles to line up automatically is a function also known as platooning. However Apple wants the cars to form a Peloton in order to perform certain functions. Apple is thinking of EVs sharing their battery capacity via a “connector arm” for example.

The patent goes into great detail and bases on an “ego-vehicle” leading additional ones. The order of the peloton is further determined by range and drag. Aerodynamics is a general concern for platooning ideas and so the Peloton could make electric cars more efficient. It is the same effect that cyclists in the Tour de France aim for when riding wheel on wheel.

Also in the car industry, the Peloton idea is not entirely new. Particularly heavy electric trucks are being readied for what Daimler first called Platooning. Tesla’s Semi is to be able to form a chain as well reportedly. The European Union has been looking into the idea of driving in one line in project Esprit for Easily Distributed Personal Rapid Transit as well. However, an automated connector coupling all batteries in the peloton is Apple’s idea alone.

The filing as such is no indication of actual production plans though. Still, since Apple iced their own electric car plan, they have been working on autonomous driving features to be sold to other manufacturers. They have retooled VW transporters for their employees for example (we reported) and so their Peloton may see the light of day in electric vehicles of external partners in a not so distant future.