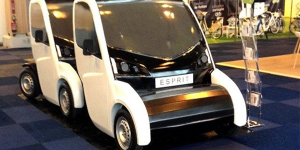 The vehicles of the fleet will have a max speed of 30 mph (about 48 km/h) and a range of about 50 km. A sharing system with set stations is planned, from which the city EVs can be picked up from a line similar to shopping carts. It is also possible to link up to 8 of the miniature vehicles in a kind of train.

Prototypes of the vehicle have now been presented in Glasgow. The parties involved in the project include the University of Aberdeen and the transport group First. Esprit is part of the Horizon 2020 program by the European Commission.