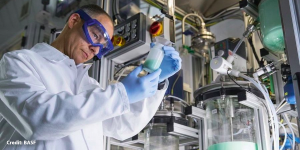 According to a new analysis, Bloomberg New Energy Finance (BNEF) has estimated that the market for lithium-ion batteries will drop prices by 52% before 2030, and that by 2040, the market will grow to 942 GW/2,857 GWh, requiring investments of around $620 billion.

The market drivers for this development would not only include electric vehicles, but also batteries for EV charging stations. “Storage is just so sensibly the next step in the evolution of renewable energy,” says Edward Fenster, executive chairman of U.S. solar company Sunrun. “If we’re going to get to 100 percent renewable energy, we’ll need storage.”

The report also makes some more precise predictions, including growth over time, in which they estimate that 2020 will see a battery production level of 50 GWh, while the majority of the energy will be in utility scale, before being overtaken by “behind-the-meter” projects, meaning installations at businesses, industrial sites and residential properties, in the mid 2030’s.