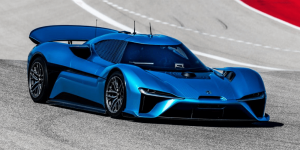 The Chinese EV startup Nio adds a new dimension to their offering. Fans can now wear their drive on their sleeve, thus showing both eco conscience and a sense of style. The clothing has not been made in just any factory but is a cooperation with the fashion designer Hussein Chalayan.

The London-based creative is known for mixing textiles and technology and has put out concepts such as clothes that dissolve or dresses moving on the touch of a remote control. His client list includes Lady Gaga, Kim Kardashian, Victoria Beckham and Rhianna.

And now Nio. For the electric carmaker, Chalayan has sought inspiration in the Nio EP9 sports car. It resulted in the Extreme collection comprised of the Speed and Movement part. Both parts are designed to reflect the way that the movement of the body is expressed through the fabric.

Okay, it is not exactly ingenuous or a very far-fetched abstraction but the collection looks wearable. Just one piece stroke us as odd, at least for an electric carmaker. The piece is called Shell.