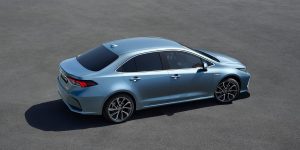 Toyota is showing their latest Corolla sedan at the Guangzhou Auto Show after having introduced the Touring Sports version in Paris earlier this year. The limousine features hybrid variants too and Toyota says the Corolla will hit 90 countries and regions in 2019.

Expect the Toyota Corolla sedan two come in two hybrid variants, just like the Corolla Touring Sports. The latter will be the first model utilising the novel dual hybrid strategy.

Sales in the United States and Europe are first and scheduled to start in spring 2019, says Toyota. The new Corolla models will gradually be rolled out in more than 150 countries and regions, including the launch of the new Corolla and Levin in China after mid-2019. The hybrid variants of the Toyota Corolla will hit 90 markets. Only Japan may have to wait a little longer with on sale slated for within 2019.

Subaru launches first PHEV in the US (gallery)