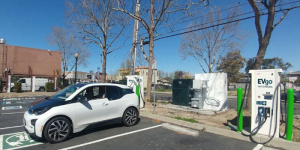 The state of New York announces a number of actions to spur EV adoption in the region. The $250-million EVolve NY initiative includes 200 fast-charging stations with 150 kW, lower charging fees for residents and PEV rebates.

The EVolve NY scheme involves multiple stakeholders of the state all interested in increasing electric transport across New York.

The installation of the planned 200 DC rapid charging stations for example, lies in the hands of the New York Power Authority (NYPA). They concentrate their initial roll-out on major traffic corridors, John F. Kennedy Airport and five major cities. NYPA has identified the first 32 locations and is finalising specific site details with the vendors that will provide and install the charging equipment. EVolve NY aims for four 150 kW chargers per location at average intervals of less than 75 miles (120 km). Construction will begin in spring 2019 along priority travel corridors such as Buffalo to Montauk, and from Long Island to Canada.

Not just travellers but residents too shall benefit from the EVolve NY programme. New York’s Public Service Commission has introduced time-of-use rates during off-peak hours so that residents pay a guaranteed standard rate. Moreover, the governor extended a scheme for the installation of residential charging stations with another 5 million dollars in funding. Charge Ready NY rebates can be combined with New York State’s 50 percent tax credit for installing charging stations.

Last but not least, New York state launched the Drive Clean Rebate. Administered by the New York State Energy Research and Development Authority (NYSERDA) more than $15 million in rebates for New Yorkers have already been approved and another 70 million dollars earmarked. The scheme provides New York residents with a rebate of up to $2,000 for the purchase or lease of a new electric car.

EVolve NY is part of Governor Cuomo’s Charge NY 2.0 initiative that is to support the state to reach its goal of installing at least 10,000 charging stations by the end of 2021.