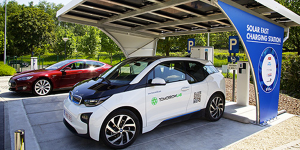 Engie will own and operate the network and promised to supply 100% renewable power for the 88 chargers. West Yorkshire Combined Authority placed the order after securing almost £2 million from the Government’s Office for Low Emission Vehicles (OLEV) for the work. In addition the Combined Authority and its district partners, Bradford, Calderdale, Kirklees, Leeds and Wakefield councils are providing £1.2m of match funding.

Indeed several private hire and taxi firms across West Yorkshire provided letters of support for the Combined Authority’s successful funding bid. Drivers would be able to reserve time slots at the new charge points in what will be the second biggest project to provide charge points for taxis outside of London.

The councils claim the charging points will provide a full charge of an electric vehicle in around 20 to 30 minutes. All 88 stations will be free to use until late October 2021 while Engie’s contract runs over ten years. The utility has become increasingly active in Britain and invested 3m pounds in UK-based Connected Energy, known for its stationary energy storage system E-STOR reportedly.

The next step is to identify suitable charge point locations in West Yorkshire.