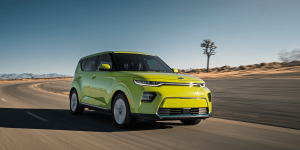 Kia has presented the newest generation of the Soul at the LA Auto Show, which will be available in Europe starting in the first half of 2019 exclusively in the BEV version named the e-Soul. Prices and range have not been released yet.

The Kia e-Soul is using the powertrain from the top version of the Kia e-Niro electric vehicle.

Prices and range have not been released yet but Kia has released some data on the performance. The new Kia e-Soul has grown from 81 kW of the previous model to a more solid 150 kW. This means the torque would increase from 285 to 395 Nm. The lithium-ion battery capacity was also significantly increased from 30 to 64 kWh, and will reportedly be fitted with a CCS fast charging port in the serial setup.

Kia also revealed some details regarding their regenerative braking system in the e-Soul. It will have four levels, which can be chosen as required by the driver. The Brake and Hold function, for example, will brake the vehicle solely in a recuperative mode until standstill. Additionally, the intelligent system is capable of orienting itself according to traffic ahead, and maximising brake efficiency accordingly, according to the Korean manufacturers.

The optical design has been updated from the previous models, but still maintains its box-formed basic architecture, as was expected. The colour palette has been expanded by additional single and double-colour designs, according to the manufacturer. The charging port has retained it’s position in the grille, which has replaced the radiator from the previous versions.

Regarding the interior of the e-Soul, the most notable feature is that Kia will be implementing their UVO telematics system to control vehicle functions. According to the manufacturer, this includes the following functions: “Notifications of battery and charging status, Real-time charging station update, “Panic notifications”, where the vehicle will send a notification to the server if the panic alarm is triggered and the system dials 911 emergency services, provides the car position via GPS, and opens a live microphone so that emergency workers can communicate with the vehicle occupants.

The e-Soul will be produced in the Korean town of Gwangju. At first, the third generation of the e-Soul will debut in the USA in 2019, before the little electric car will be exported to Europe over the course of the year.