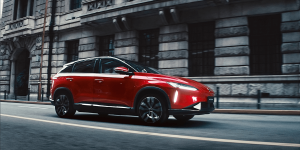 Xpeng had been working on their first electric vehicle since 2017 and never made much of a secret that they wanted to use Tesla’s open source patents. Whether they really made it into the series G3 electric car however, is unclear. Still, particularly the interior of the EV as well as the panoramic windshield do take inspiration from the Californians.

In terms of performance, the series remains largely unchanged with Xpeng specifying a maximum power output of 145kW and maximum torque of 300Nm.

As for the range, Xiaopeng is using the NEDC standard and it says that it has two battery options, yet they appear to both offer more or less the same range, i.e. 351 km and 365 km.

Moreover, Xpeng is offering a range of automated driving features. CEO and Chairman He Xiaopeng, described them as “self-developed innovative features, many of which are first-of-its-kind, are intended for China’s unique user behaviors and road conditions”. Apart from parking itself, the electric car also comes with facial-recognition sensors enabling payment, driver fatigue alert and heart-beat monitoring functions through OTA upgrades.

Xpeng currently manufactures the G3 at a plant owned by Haima in China, that has an annual capacity of 150,000 electric vehicles and delivers 90% of materials and parts automatically at the assembly line. Headquartered in Guangzhou, the startup has their own R&D and marketing divisions in Beijing, Shanghai, Silicon Valley and the Guangdong Province, where its own new manufacturing base is currently under construction. The facility is expected to be completed by the end of 2019.