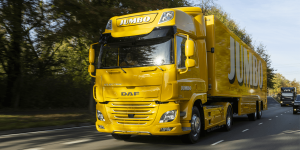 DAF Trucks has delivered its first fully electric truck, the CF Electric, to Jumbo supermarket chain. The electric semi-trailer was developed with VDL and premiered at this year’s IAA Commercial Vehicles. Jumbo will use the CF Electric to supply its supermarkets in the south of the Netherlands.

The delivery of the first electric semi marks the start of a series of long-term tests with all-electric and hybrid trucks from DAF, from which the manufacturer hopes to obtain informative data for fine-tuning.

The CF Electric is one of two electric trucks presented at the IAA in Hannover. This 9.7-tonne 4×2 tractor unit scores well in urban distribution traffic with a total train weight of up to 37 tonnes powered by a 210 kW (peak 240 kW) electric motor. The 170 kWh battery gives the semi-trailer a range of 100 km and can be recharged within 90 minutes using a fast charger. VDL has been instrumental in providing technology and know-how in the development of the vehicle.

A charging station has been installed at the Jumbo distribution centre in Veghel. According to DAF, the two companies are looking into whether it would be feasible to install solar modules to supply power to the charging station.

“The transport sector is about to undergo a major transformation,” says Harry Wolters, President of DAF Trucks, “Electric trucks look set to become the norm for deliveries in urban areas. Not today and not next year, but definitely within the foreseeable future.” This is supported, among other things, by Jumbo’s plans the electrification of its fleet: 45 per cent of Jumbo stores will soon receive their deliveries from e-vehicles.

Mini electric buses back in Rome