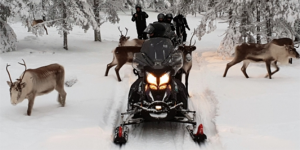 Finnish company Aurora eMotion has developed fully electric snowmobiles, with which you can take a safari through the frozen tundra of Lapland.

The “eSleds” have a range of up 25 km on a single charge, which doesn’t make it ideal for traversing long distances, but given that the vehicles function reliably in arctic environments, that is an achievement on its own. The main feature is also the environmental benefits of the battery electric vehicle, as the company believes that “you don’t want to ruin the silence of nature and the feeling how is it to be in the deep down forest,” according to Olli Haavikko from Aurora eMotion. Silence has the added benefit of making it easier to get closer to wildlife, as a company in Tanzania has already discovered.