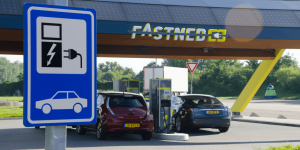 The Dutch fast-charging company sold more electricity in the fourth quarter of 2018 than in the whole year of 2017, while the revenue also tripled. Plus, with new EVs such as the Tesla Model 3 or Jaguar I-Pace arriving in the Netherlands, Fastned expects further and rather rapid growth.

Already the end of the last year had indicated as much. At the end of December, the Fastned network had 85 fast charging stations, of which 23 deliver a maximum of 175 kW. They contributed to Fastned’s growth, particularly in the fourth quarter of 2018 when Fastned delivered more electricity than throughout the whole of 2017. These are the numbers for Q4:

Interestingly, Fastned continued to grow faster than the market. As the number of electric vehicles in the Netherlands doubled, Fastned’s volume tripled. In December alone, customers completed 30,586 charging sessions.

But also in terms of substantial rather than financial expansion, 2018 was a good year for Fastned. The company reached out to supermarket chains such as Albert Heijn in the Netherlands and also Rewe in Germany. Here they are trialling fast-charging at four large supermarkets. If the pilot is a success, they will expand their cooperation to other locations. In total there are now 8 stations operational in Germany, according to Fastned.

Naturally further expansion is in the cards. Fastned say they have been preparing for the construction of a series of fast charging stations in the Netherlands, Germany and the UK in the first half of 2019. Eventually, they will be capable of high power charging with 350 kW which is a hundred times faster than charging your electric car at home, Fastned claims.

According to the statement, the numbers above are unaudited. Audited annual figures will be published in April.