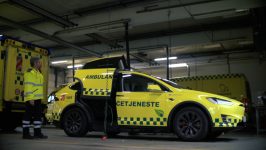 Falck, a company specialising in ambulance services, has converted a Tesla Model X into a rescue vehicle and is currently testing it in southern Denmark. A rollout is not entirely unlikely, given they went as far as designing a new system to power live-saving equipment independently.

The company’s CEO Jakob Riis explained the new system with sound logic in mind:”We drive with a separate electric system in the car, which means that all equipment is powered outside from the car’s battery so that eg. emergency lights and sound, radio, medical equipment and cooling / heating equipment run in a closed system which is charged at departure, while one electric system constantly lets you drive and stay outside the garage.”

While Falck operates internationally with over 30,000 employees, they have not issued a time plan for when a serial conversion kit for Teslas will be available as rescue vehicles.

The end of ICEing