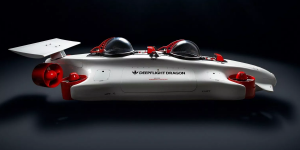 DeepFlight Dragon is the promising name of an electric submarine for two people. At a price of 1.5 million US dollars, it is easy to see why its aimed at superyacht owners. The new underwater vessel operates much like a drone, only under water.

In terms of underwater mobility, the DeepFlight submarine has the unique capability of being able to hover, thanks to its drone-like propulsion systems. The submarine’s quad brushless DC thrusters keep it stable so that it can manoeuver in a similar way to a quadcopter in the air. Because of being electric, ie silent and non-polluting, the sub can move alongside large animals, through reefs or around shipwrecks. Much like diving, only much more expensive, but probably also a lot safer.

The safety aspect is namely another significant feature of this underwater vehicle. The “dragon” always remains buoyant and keeps underwater with the constant use of its thrust propulsion. This means that there is no need for weights or ballast, which are potentially dangerous points of failure. The best feature of this buoyancy and thrust system means that, in the case of any kind of engine failure, the vessel will simply float to the surface. If all else fails and one finds oneself stranded somewhere for any reason, there is additional battery power available for up to 72 hours.

The DeepFlight Dragon can dive for up to 8 hours thanks to a large 14 kWh LiFePO4 battery pack. At a weight of 1800 kg and a length of 5 m, the underwater explorer was explicitly designed for easy operation from superyachts. According to the manufacturer “fit on more yachts than any other submarine on the market, often with little or no retrofit required.”

A lot of money is required, but a pilot’s licence is not. Anyone can use the vessel because the pilot controls are about as simple as they can get. In one hand you have a lever, that controls your height in the water, in the other you have a joystick that controls forward, backwards and side control. This is thanks to the vessel’s automatic stability software and multi-axis thrusters.

Marine enthusiasts now have a lot of toys to choose from. Starting at electric surfboards and moving up to slick Scandinavian tenders for superyachts, there are also electric sailing yachts, and for those of us who travel with the masses can still go all-electric with electric ferries in Thailand or through Norwegian fjords.