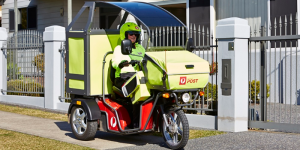 Australia Post has bought another 1,000 electric three-wheelers, making them the nation’s largest electric vehicle fleet operator. They also ordered an additional 4,000 pedal-assist bikes. Delivery is planned over the next three years and to begin this June.

Going electric is part of their ecological planning, as Bob Black, Australia Post’s COO states, “they will also help us achieve our commitment of reducing our carbon emissions by 25 % by 2020.”

An interesting factor to note in the planning is the notion that parcel shipping has increased over the recent years, while letter delivery is on the drop. This means that delivery vehicles also face different challenges than they did a few years ago. Adds Mr Black, “with parcel volumes growing – on average, close to 10 % each year for the last three years – and letter volumes declining, we’re always looking for ways to ensure our posties continue to play an important and sustainable role in the community.”