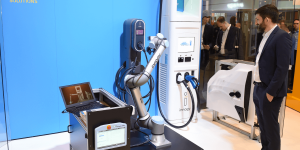 Although Innogy does not mention any technical details, it does explain that the robot is equipped with “the finest sensors and a camera” to detect how and where a car is parked. According to the charging specialist, such a device is particularly useful for fleet operators who can charge their vehicles at the right time via such robots. The next generation of fast charging robots as the one Samsung presented before, will therefore also have an interface for scheduling, Innogy projects.