Volkswagen’s subsidiary Electrify America has provided details of the second phase of its US-wide charging infrastructure build-up plan, which includes $300 million in investment over 30 months, the implementation of which will begin in July 2019.

This is the second cycle of the reparations which Volkswagen has been ordered to cover, resulting from their role in the diesel scandal. It is estimated that Electrify America will need to invest a total of $2 billion in charging infrastructure deployment across the United States in four 30-month investment cycles. The first phase, with a good 2,000 charging stations, will run until June 2019 and will cost around 500 million dollars.

The second phase now presented starts in July 2019 and will last until December 2021. Electrify America will continue to focus on creating charging opportunities in conurbations. The new focus will be on the metropolitan regions around Atlanta, Baltimore, Honolulu, Las Vegas and Phoenix. The company will also strengthen its existing operations in Boston, Chicago, Denver, Miami, New York City, Philadelphia, Portland, Seattle and Washington DC. Charging stations will be installed primarily at shopping malls, near apartment buildings, and in places where shared mobility players such as taxis and car sharing providers have access. 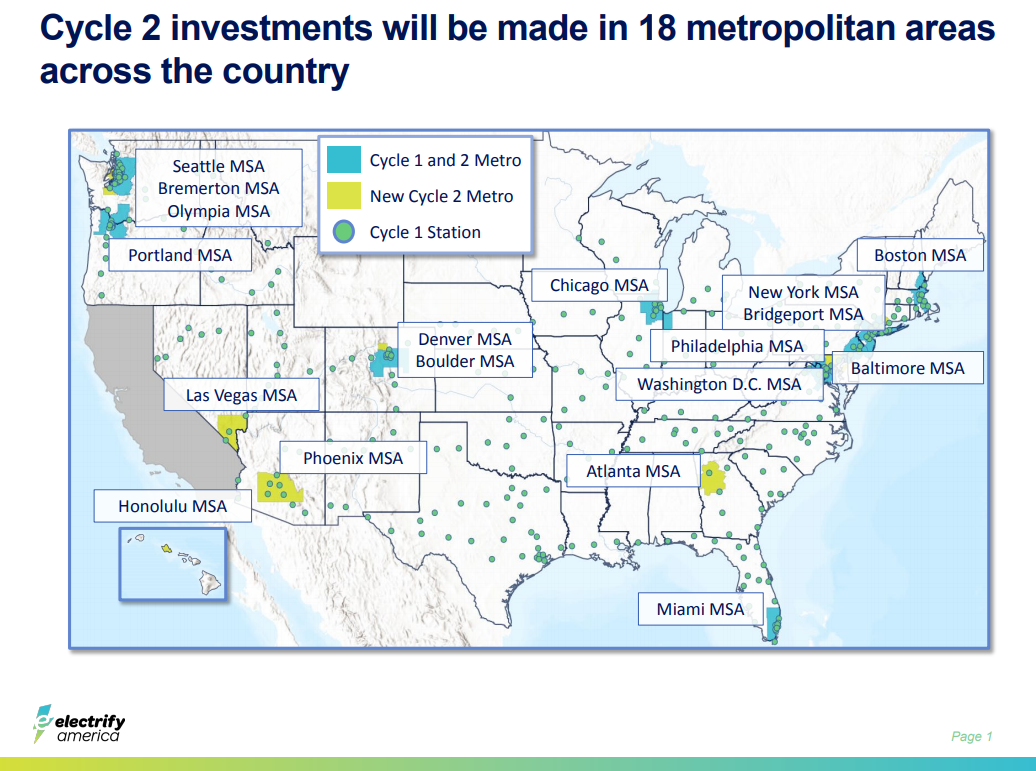 In addition, in phase 2 the charging network already started on motorways and regional roads is to be expanded and intensified. Electrify America also plans to build two charging devices specifically for autonomous electric cars as a test, and also to tackle the switch to renewable energies at selected stations. Finally, a brand-neutral campaign to promote electric cars is planned.

Electrify America had already presented its plans for the second construction phase in California last October. The state plays a special role because a large part of the investments – specifically a quarter of the total sum of 2 billion dollars – are made there. For this reason, Electrify America is presenting the projects there separately.