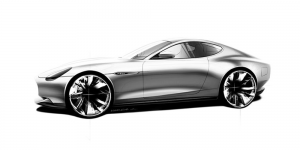 The Swiss company Piëch Automotive will present an electric sports car called Mark Zero at the Geneva Motor Show, which will be followed by several other vehicles. Behind the company is Anton Piëch, a son of former VW boss Ferdinand Piëch, whose grandfather was Ferdinand Porsche.

Apart from initial sketches and family matters, only the following details have been released about the Mark Zero: The electric sports car is supposed to look like the Porsche 911, offer a WLTP range of 500 kilometres and rely on a new type of battery cell that “permits significantly higher current flows during charging and discharging and generates hardly any heat”. According to the manufacturer, air cooling is therefore sufficient to save weight and achieve a total weight of 1.8 tonnes. The batteries will probably be accommodated in the centre tunnel and on the rear axle. According to reports, the price for the electric sports car is expected to be around 200,000 euros.

According to Piëch Automotive, the Mark Zero will be the vanguard of a whole series of new vehicles all based on a modular platform. The architecture is said to enable up to 60 model variants and autonomous driving. Starting with the electric car, other models such as an SUV and a four-seater sedan are already under consideration. In addition to the purely electric drive, versions with hybrid drive, fuel cell or pure combustion engine will also be possible, says the company, although it leaves one wonder a bit.

The Swiss do not yet name a production site or any production partners but say they will follow “German production practices” without going into any more precise detail. Piëch Automotive has revealed, however, that the flexible platform is to be marketed, i.e. offered to other manufacturers as well. Let’s see whether the Mark Zero electric car truly will see the light of the day first.

BMW is stocking up staff for electrification

Deliveries of Kia e-Niro delayed due to shortages