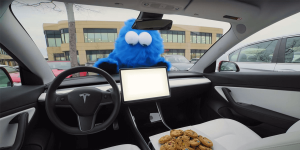 It seems that Cookie Monster took time out from his busy Sesame Street schedule to show Tesla’s Sentry Mode security system. Tesla released footage of Cookie Monster’s attempted break-in via Twitter to show all three modes of the system.

Tesla’s newly released Sentry Mode, has three states: A “standby” state whereby the car’s external cameras start recording while determining if there is a threat, an “alert” phase where the vehicle screen displays the warning message showing that the cameras are recording, and thirdly, an alarm state, which makes a lot of noise, drawing as much attention to the vehicle as possible.

The clip shows that the Sentry Mode system cameras start recording when Cookie Monster approaches the Tesla electric car. The new security system went into full “alert” state when the furry blue muppet started banging on the car, which involves the car’s horn going off and loud music to generally drawing attention to the car.  If you watch the short clip to the end, you can see Cookie Monster sneak up to a side door in another attempt, which immediately puts the car into its “alert” state and starts recording.

Tesla makes sure the footage is sent to a server, in the event that a Cookie Monster or some such similar rascal eventually manages to break in and steal the recorded footage of his misdemeanours.

Zero emissions musicians on the road