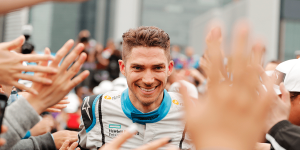 And the winner of the Hong Kong E-Prix is Venturi. The team has won for the first time in what was the 50th Formula E race. Swiss Edoardo Mortara celebrated his maiden win, benefiting from a five-second penalty to finisher Sam Bird.

In this Formula E race in Hong Kong, Bird then dropped to sixth place thus enabling a second place for Audi Sport Abt Schaeffler’s Lucas di Grassi. Third in this e-prix was Envision’s Robin Frijns. The final result also marked the first success of the Monegasque Venturi team in 50 Formula E races.

The lucky winner Mortara, who already moved up one spot after the last race in Mexico, said: “I wanted to stay out of everything and focus on my race, that really paid off in the end.” Mortara was super happy about P2 on the podium. Hours later he posted on Instagram, clearly overwhelmed: “It looks like we just won the Hong Kong E-Prix. What a day, what a race. Woooohhhooooo!”

A thrilling duel between Sam Bird (Virgin Racing) and the German André Lotterer in the service of DS Techeetah dominated most of the race. After a braking mistake by Bird, Lotterer took the lead one-third into the race. Both battled each other with one fastest lap after another. Lotterer was pacing with 4-5% less energy than his opponent behind, again riding on the edge as we had seen in the last race in Mexico. In the final moments, Bird made contact with the leading André Lotterer, breaking Lotterer’s rear suspension and puncturing his tyre. The damage destroyed any chance of Techeetah winning in Hong Kong, prompting Lotterer to comment: “I think we had it. We were quick all day, and it looked pretty good. Not really a fair move by Sam Bird. Now we go home empty-handed. It’s pretty sad.”

But theirs was not the only crash. Shortly after the start, the red flag interrupted the unfolding action following a crash by Felipe Nasr with the two Mahindra pilots Pascal Wehrlein and Jerome D’Ambrosio rushing into his rear. Due to numerous mistakes, additional yellow flags and safety-car-phases interrupted the flow of the Hong Kong E-Prix, making it not the most entertaining race to watch compared to previous rounds this season. In the end, only 14 of the 22 drivers made it to the finish line.

A day full of ups and downs especially for the German team HWA Racelab. In the fifth race, the newcomers to Formula E secured their first pole position and also scored the first points. However, the excitement over Stoffel Vandoornes sensational pole (3 points) in the rain of Hong Kong did not last long. In the first turn, Nissan’s Oliver Rowland overtook the former Formula 1 driver, and a little later Vandoorne dropped out due to a driveshaft failure. His teammate Gary Paffett initially held his position in the top 5 but slipped after the re-start gradually back to P8. The DTM champion defended this position to the finish and thus secured HWA another four points.

Another tough contender in the championship, BMW took home just one point thanks to Antonio Felix da Costa’s finish in 10th place. In the middle of the race coming out of a turn, Alexander Sims oversteered and collided with the wall on the tight street circuit – this was it for the second BMW driver.

Audi, however, had a reason to pop some champagne bottles at the Golden Jubilee. Lucas Di Grassi and Daniel Abt are the only two teammates to have participated in all 50 Formula E races together. Di Grassi came in second after the Bird-penalty and is now tied in with Jerome D’Ambrosio (53 points) in second place of the championship – one point behind the overall leader Bird (54 points).

In addition to the usual tactics regarding energy management this time it needed another virtue to gain valuable points in the Formula E World Championship: Keep calm and stay out of trouble. Audi driver Daniel Abt capitalised the most, by driving up from P12 to P4: “It was a pretty hectic race, really chaos. Pretty good team result, important points,” he posted on Twitter.

The Formula E will continue in two weeks in Sanya, China before the all-electric championship will be back in Europe, that is Germany. Due to the strong demand for tickets, FIA added two more grandstands to the Berlin E-Prix thus making 1,496 additional seats available for the race on May 25 at Tempelhof Airport.

Zig-zag at Tesla: prices are back up