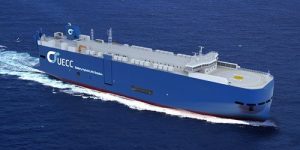 The Norwegian shipping company UECC (United European Car Carriers) has placed orders with China Shipbuilding and Jiangnan Shipyard for two hybrid transport ships for cars (PCTCs). The first is expected to be delivered in 2021.

The two PCTCs (Pure Car Truck Carriers) will be equipped with battery LNG hybrid drives and will be able to transport 3,600 vehicles on a ship length of 169 metres and a width of 28 metres over ten cargo decks. The first of these ships will be delivered in 2021. The contract also includes options to expand the contract for two additional ships.

The vessels will be equipped with a Battery Hybrid LNG Solution which will place UECC beyond IMO’s target for a 40% reduction in carbon intensity by 2030, according to the transport operator. UECC CEO Glenn Edvardsen was proud of the move: “This is a giant leap towards decarbonization, and unlike anything else that has been done previously in our industry, I believe, and something that we are extremely proud of.”

The vessels will meet the Tier 3 IMO NOx emission limitations coming into force the Baltic and the North Sea starting in 2021. The company also plans to invest in bio fuels, which they expect to become increasingly commercially available in the future, as plans to use carbon neutral and synthetic fuels as part of their fuel mix.