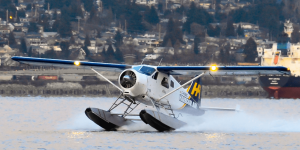 The first aircraft to be converted to electric propulsion is the DHC-2 de Havilland Beaver for up to six passengers, which will be used on Harbor Air’s entire route network. The first test flights are scheduled for the end of the year.

The 200 kWh batteries of the electric aircraft will provide enough power for 30 minutes flight time (including 30 minutes reserve), which is sufficient for about 70 percent of Harbor Fly’s 30,000 flights per year, according to an accompanying press release of the Canadian airline. Harbor Air’s route network connects Vancouver with islands in British Columbia and crosses the border to the US city of Seattle.

MagniX aims to obtain certification from the Canadian and US authorities by 2021 for its engine and approval to modify the Beaver aircraft. Only then will Harbour Air be able to begin retrofitting its nine other Beaver aircraft and introduce electric-powered operation in 2022. Harbour Air currently serves twelve routes and transports more than 500,000 passengers annually, according to its own figures.

“In 2018, 75 percent of worldwide airline flights were 1,000 miles or less in range,” says MagniX CEO Roei Ganzarski. With the new propulsion systems and the new battery capacities, he sees “tremendous potential for electric aviation “. MagniX was founded ten years ago in Australia and is owned by Singapore billionaire Richard Chandler.