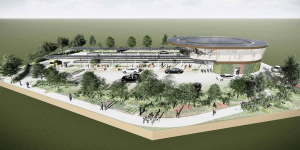 The British company Gridserve has announced plans to build a series of pit-stop-like charging sites for electric vehicles, complete with solar farms and power storage units. 100 of these EV-specific rest stops are to be developed over the next five years with a budget of no less than a billion pounds and mighty partners on board.

Gridserve is tapping into funding sources for both renewables as well as electric mobility and has teamed up with ChargePoint and engineering firm Arup to create the pit stops for EVs. Each location is expected to include up to 24 ultra-fast charging bays, with the batteries able to support maximum charging requirements simultaneously. The promoters go as far as to say the station will eventually be capable of handling 500 kW high power charging capacity, as well as options for buses, trucks and other commercial vehicles, aside from the varieties of electrified passenger vehicles available on the market.

First, however, the so-called Electric Forecourts are explicitly designed for the needs of electric vehicle drivers, featuring dedicated zones for fleet and private vehicles, each supplied with fast charging technology, alongside the usual amenities drivers need, such as a supermarket, coffee shops and restaurants. The hub is also designed akin to an airport lounge, meant to provide a comfortable space for passengers to pass the time.

Government support comes in from the UK’s first Energy Investment Portfolio, and promotes the construction of the solar farms, which will provide the power for the vehicle charging.

Gridserve says it has secured sites for 80 forecourts and that large stationary batteries will be installed onsite to provide balancing and grid services. Also, the solar farms that are to deliver renewable energy are currently being developed by the company. Two industrial-scale solar farms and a 27MW battery storage facility are planned in York and Hull before the end of next year. Jointly funded by Investec Bank and Leapfrog Finance the facilities will have a combined capacity of 62MW.

Gridserve’s chief executive and founder, Toddington Harper, has a big vision for the concept of travel services for EV drivers and will not do it alone: “We are partnering with operators of fleet vehicles, developers, financiers of vehicles and infrastructure, EV manufacturers, retailers, local authorities, and others who share our vision.”

An app is being developed by the company to help drivers plan journeys and reserve charging slots as well. A new queuing system will also minimise waiting times for electric vehicle drivers in the UK, Gridserve claims.