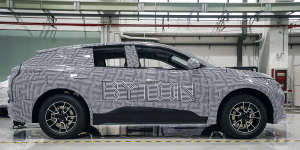 As we reported just late last week, there were rumours that Breitfeld was leaving Byton to take up a position at the Chinese startup Iconiq Motors. Now, at the same time as the official announcement of Breitfeld’s farewell, Gasgoo has reported that the manager confirmed his move to Iconiq Motors at Auto Shanghai. Iconiq is an electric car manufacturer based in Tianjin, China. The first model of the still young company is the all-electric seven-passenger transporter, which has already been introduced and is scheduled to roll off the assembly line in Tianjin starting this year.

In the announcement to confirm that Breitfeld is leaving the company, Byton co-founder and CEO Dr Daniel Kirchert said: “Carsten helped build a strong Byton brand and bring in the right people to take our startup to the next level.” Kirchert himself had only recently been appointed CEO in January this year. Previously, Breitfeld held the positions of Chairman of the Board (COB) and Chief Executive Officer (CEO). When the two Germans helped to launch the electric startup in 2016 their involvement received attention with media heralding the company as “China’s answer to Tesla”. At the time, Breitfeld moved from BMW where he was responsible for the development of the BMW i8 as the project manager.

In the company statement confirming Bretfeld’s exit, Byton says that their company has “experienced growth at a high rate” and that they will be able to close their ongoing C-round of funding this summer. They say that they are on track to start series production of their first vehicle, the all-electric SUV M-Byte by the end of this year. For this purpose, construction work at Byton’s plant in Nanjing should be completed in the next three months. Byton CEO Kirchert said that they were “looking forward to delivering the M-Byte this year to customers in China, followed by the U.S. and Europe in 2020.” Earlier this month it was announced that Byton had already received more than 50,000 reservations for the M-byte.