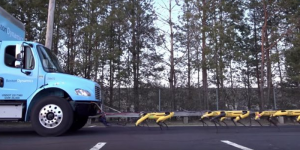 Boston Dynamics builds canine-inspired robots that may not be quite as cute as Sony’s late robodog but strong. So strong in fact, they can double as a zero-emission drive for trucks when grouped.

Boston Dynamics has published a promo video ahead of the on-sale of the robot-greyhound in which you see ten so-called SpotMinis double as sledge dogs. Only this pack is hauling a massive truck along. It makes for a curious sight and an even more unusual sound that reminded us of horse hooves although this clip-clop is decidedly more mechanical and Boston Dynamics considers these bots the most silent machine they have ever built.

Under normal operating conditions, the robots can run for 90 minutes, but it is unknown for how long the engineered pack of ten SpotMinis managed to keep the truck going. The stretch ran one degree uphill.

Boston Dynamics has just started production and says the robot cannot only pull but can walk stairs and has an arm that can handle objects. Staying with the canine analogy, the robot-dogs could go on rescue missions in future.