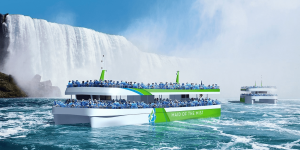 Swiss ABB has scored a contract from Niagara Falls tour operator Maid of the Mist to equip two passenger vessels with enough battery capacity to see the natural spectacle emission-free. The electric ships are set to launch this season.

As the boat builder is in America, the operator expects the two boats to arrive in late summer equipped with ABB’s battery packs with a total capacity of 316 kWh. Power is split evenly between two catamaran hulls and having two fully independent systems on board will increase the resilience of operations, ABB explains in a statement. The electric motors have a total of 400 kW output, controlled by ABB’s integrated Power and Energy Management System (PEMS).

The all-electric vessels will charge between every trip to the foot of Niagara Falls although shoreside charging will only take seven minutes. The batteries will be charged using hydropower.

In addition to integrating the ship-to-shore battery charging connection, ABB will supply the Maid of the Mist project with switchboards, drives and the integrated control system, as well as the Marine Remote Diagnostic System for remote equipment monitoring and predictive maintenance.

The tour operator claims to be among the longest running services in North America. Maid of the Mist services operates from April through to the first week of November, with boats departing for the base of Niagara Falls every 30 minutes, with an estimated 1.6 million guests on board annually.

Update Tuesday 6 October 2020: ABB has just announced that Maid in the Mist has just launched the new generation of ferries at Niagra Falls. ABB has supplied the drives for two all-electric ferries used on the Maid of the Mist boat tour at Niagara Falls. The two electric ferries named James V. Glynn and Nikola Tesla have now been approved for operation.

“As well as allowing passengers to enjoy the spectacular experience of Niagara Falls and safeguarding the environment, the vessels confirm growing acceptance of all-electric vessel propulsion,” said Juha Koskela, ABB Marine & Ports Division President. “We applaud Maid of the Mist’s decision to move to zero-emission operation and are honored to have worked with this forward-thinking company on implementing the electric power and propulsion solution.”