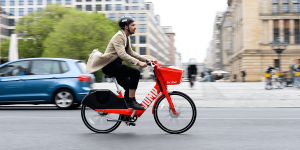 Uber today launched its e-bike-sharing service Jump in Berlin as the first city in Germany with around 1,000 pedelecs. The bright red electric bicycles are now available in 12 districts of the German capital.

Uber transport services are entering the German rental bike market with 1000 electric bicycles in Berlin. The red pedelecs from the subsidiary Jump can be booked via the provider’s conventional app. In Berlin until now, the company only offered taxis and rental cars with drivers via its app. Last month, Uber started the initiative in Brussels.

The bikes will not be bound to fixed stations and will be widely available in twelve districts. Uber has been conducting a test phase over several months and come to the conclusion that there is a strong demand for pedelecs, which provide an alternative to car journeys. The initial fleet encompasses 1000 pedelecs and will be increased soon as the offer continues to spread to other cities.

Jump bikes has put more than 12,000 e-bikes on the road in 40 cities in six countries since it started up in 2010. At the beginning of April 2018 Uber took over the company. With this acquisition, Uber is showing its ability to think beyond cars. The rental bike business is part of the strategy to offer a wide variety of means of transport from rental cars and scooters to taxis and bikes via an app platform.

An electric scooter made by Vmoto and Ducati