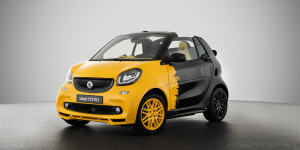 For a bit of fossil-fuelled nostalgia before Daimler’s Smart brand becomes purely electric next year, the German company is launching a series of its final 21 combustion engine vehicles in a limited collector’s edition.

But for real nostalgia about the Smart, the beginnings of the vehicle should be looked at. The Smart was never meant to be entirely fossil-fuelled in the first place.

The idea of a German minicar began already in the mid-80s. The first concept of the Smart was developed by Nicolas Hayek, the co-founder and CEO of The Swatch Group, and was designed to be electric. Apart from a core concept of either a fully-electric or hybrid drive, the idea was to have an interchangeable body (similar to the Swatch watches) as well as cooperation with the railways in the form of a car that could be carried on long journeys. A concept that the markets and vehicle makers may only now be ready for, with new concepts in micro-mobility.

Hayek started developing the Smart in a co-operation with Volkswagen in 1993. VW was not entirely convinced by the project, which led to disagreements with Hayek, who then took the study to Mercedes. In 1994, Hayek founded the company MCC (Micro Compact Car AG) as a joint subsidiary of Daimler-Benz and SMH SA (Société Suisse de Microélectronique et d’Horlogerie). However, both Hayek and senior development team members left the project when MCC abandoned the original concept and the planned electric or hybrid drive in favour of the combustion engine –the very one we are now saying good-bye to.

So to look back on the life of the Smart – it may be 21 years of a combustion engine in the little car – but it is at least 25 years of a space-saving, low-energy use, electric minicar concept that is finally at least picking up on some of the innovations originally intended. But before the small car brand goes back to the future, Smart is launching a series of its final #21 combustion engine vehicles in a limited collector’s edition. Daimler says on their press release that “The edition centres on the idea of 21 years of smart, 21 vehicles, 21 years always a step ahead.”  One might find this worth celebrating with a special edition involving the very ideas that Hayek adamantly rejected, but one can also celebrate the 25 years of the intended idea of space and energy saving, electric mobility at an affordable price.