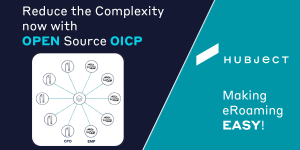 Hubject has turned their Open InterCharge Protocol (OICP) into an open source protocol to facilitate connectivity with their popular roaming platform. In addition to publishing OICP, Hubject will also allow connection to the platform via other roaming protocols.

Hubject is the operator of the intercharge roaming network, which, according to the company, has grown to more than 100,000 charging stations and over 300 B2B partners in 26 countries.

The Berlin-based joint venture was founded in 2012 by BMW, Bosch, Daimler, EnBW, Innogy, Siemens and Volkswagen with the aim of creating a user-friendly and reliable interoperability solution. This announcement invites all market participants to jointly further develop the OICP protocol,” says Hubject sales director Nils Dullum. “We are convinced that industry development will accelerate and that interoperability will soon become an everyday reality if we can work together openly.

Using the OICP has always been easy, says Hubject. The 2012 protocol, as mentioned above, already connects over 300 companies in 26 countries via an API connection. As an open source protocol, it now offers charging station operators an even easier way to connect and exchange data via an API, enabling them to offer reliable roaming to electric car drivers. The protocol can now be downloaded free of charge from Hubject’s website. It will also soon be available via other distribution systems.