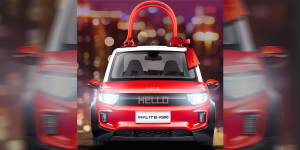 How about an electric car made to look like a handbag? That’s what BAIC BJEV has come up with for its launch edition EV released on China’s ‘Internet Valentine’s Day’ on May 20. While they’ve made some questionable style choices, other features seem rather fun.

To start with the obvious, those handbag handles on top of the roof is an accessory you might want to get rid of sooner or later. But, as you will get noticed in the little electric car anyway – despite it being about the same length as a Smart – you might want to make good use of the LED displays at the front and back that allow designing emoticons or messages for public display. Just be careful what you say, as this future-fancy, cheap, flashy little car with a questionable top has upgraded voice recognition.

But handbag handles aside (please!), according to Gasgoo China Automotive News, the performance data isn’t bad either: The Lite-R300 has an electric motor at the rear axle with a maximum output of 40kW and torque peak of 140 Nm. A 30kWh lithium battery enables an NEDC range of up to 300km. The little electric car can charge up to 80% of its battery capacity within 30 minutes in fast charging mode.

Autonomous services with Renault and Transdev