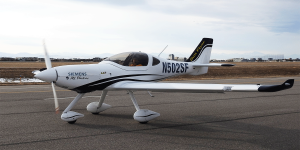 The on-demand flight service, also known as kind of a “Uber for Aircraft”, is purchasing 100 four-seater eFlyer 4 and ten two-seater eFlyer 2 to integrate them into its platform starting next year. The eFlyer 2 is currently undergoing an FAA certification process. Once the process is complete, it’s eFlyer 4’s turn. According to the San Francisco Chronicle, the four-seater model could be released in the fourth quarter of 2020.

Bye Aerospace has not yet published any concrete performance data on eFlyer 4. Unlike the eFlyer 2, which we reported on under its former name Sun Flyer 2: In April 2018, Bye Aerospace announced the successful maiden flight of the eFlyer 2. In February of this year, the eFlyer took off for the first time with its 70 kW continuous and 90 kW peak output Siemens engine, which will be on board as standard. In principle, the two-seater electric aircraft should be able to stay in the air for up to three and a half hours.

Regarding the name change from “Sun Flyer” to “eFlyer”, George E. Bye, founder and CEO of Bye Aerospace, explains that the latter designation better represents the all-electric propulsion system of the aircraft. “We originally thought solar cells would be standard on the airplane’s wings,” said Bye. “However, with eFlyer’s primary markets being flight training and air taxi services, it makes more sense to make the price of the aeroplane as reasonable as possible.”

Recently, the Colorado-based manufacturer stated that it had received requests from a total of 298 potential customers for its two models. The 110 of BlackBird will now be added on top of it. At present the on-demand service operates a fleet of 600 airplanes. “At less than $50 an hour to operate, the eFlyer 4 is the future of aviation,” rejoices BlackBird CEO Rudd Davis. His company’s flight booking app currently displays prices that vary widely depending on location and date. According to Electrek, the cheapest flights are offered from a number of Californian airports, but the service also seems to be growing on the east coast. There, BlackBird aims to score with flight packages in the New York City area.