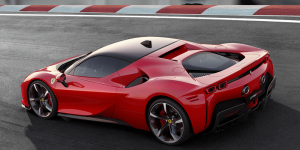 Two of the electric motors are mounted on the front axle, while the third is sandwiched between the motor and the transmission. The motors are powered by a 7.9 kWh lithium ion battery, allowing for an electric output of 162 kW and an electric range of 25 km. Acceleration in the PHEV is from 0-100 km/h in 2.5 seconds, with the top speed limited at 340 km/h.

While the first environmentally friendly Ferrari is sure to yield some surprises, the most interesting feature added is likely the rear: the engine cover is split into two sections, where the lower section is fixed, but the top part is “mobile”. “In high downforce conditions the mobile element is lowered by a pair of electric actuators, closing the lower blown area and uncovering the fixed element,” a press release by the company explains.

While we do know that the SF90 Stradale will feature four different driving modes, the company has not yet announced what the price or availability of the supercar will be. When Ferrari will build a completely emissions-free vehicle is another matter: Some time ago, former CEO Sergio Marchionne had promised that Ferrari would build the first electric supercar, assuring fans that Tesla would not dominate the segment forever. Perhaps the announcement will follow when the rest of the details surrounding Ferrari’s PHEV are communicated.

Update 17.09.2019: SK Innovation has been selected as the battery supplier for Ferrari. The South Korean company is to supply the Italian sports car manufacturer with energy storage devices for its first production model with plug-in hybrid drive, the SF90 Stradale. Ferrari is said to have opted for SK Innovation after more than two years of testing and evaluating products from other battery suppliers.