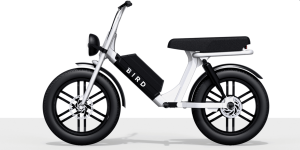 Bird has just unveiled the Bird Cruiser: a new, seated, electric two-wheeler that can optionally have foot pegs or pedals. The new vehicle is rolling out this summer as part of Bird’s global fleet of shared vehicles as well as to platform partners.

The Bird Cruiser is reminiscent of a motorbike with a large headlamp, thick tyres and a long, padded seat large enough for two passengers. Different to an electric motorbike is its smaller size and has the option of pedal assist. This means Bird is finally moving away from the standing business and offers a more comfortable solution that can even take two.

According to Bird, the Cruiser was exclusively designed for ridesharing. The e-bike has hydraulic disc brakes and is powered by a 52-volt battery. A built-in LCD display shows the route and other key trip details.

Bird was founded in 2017 by former Lyft and Uber employees and is based in Santa Monica, California. In April this year, Bird announced that they were launching ten times more electric kick-scooters in 50 new cities with the Bird One e-scooter is said to offer a 60 per cent longer battery life than its predecessors. Now the Bird Cruiser marks Bird’s first move outside of the kick scooter space. The Cruiser is designed to be part of the startup’s shared vehicles fleet and its Bird Platform programme.

The Cruiser’s unveiling comes just months after the company announced a monthly rental programme to complement its existing on-demand service. The Californian company says that other cities are to follow.