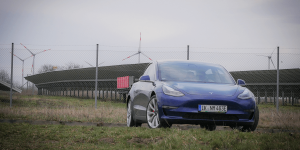 Tesla has apparently expanded the delivery of the Model 3 in order to achieve their targeted record quarter. Expiring subsidies in the USA also likely play a role, however. In addition, Model 3 will soon also be delivered in the UK.

According to media reports, Tesla is currently delivering around 1,000 Model 3s per day in North America. The reason is the targeted record quarter – Tesla is attempting to deliver between 33,000 and 36,000 Model 3 units to customers in North America over June. In the record quarter to the end of 2018, the electric car manufacturer delivered 90,700 vehicles. Tesla plans exceed this figure by reaching their new target for June.

The fact that US subsidies will be further reduced for Tesla vehicles delivered from July onwards, may also have played a role in the business plan. Customers who receive their vehicles this quarter will still receive $3,750 in government subsidies – from July 1, the premium will be halved to $1,875. The subsidies for Tesla will expire completely at the end of the year if there are no new regulations at the federal level.

However, the company is also creating internal competition for new deliveries: Tesla has started to sell used Model 3 vehicles online in the USA. The vehicles feature given a warranty of either 4 years and 50,000 miles or two years and 100,000 miles following a thorough inspection by the manufacturer. Currently, most long range versions of the 2017 and 2018 model years are available starting at around 40,000 dollars.

Deliveries in Europe are likely to receive a small boost, as the first batch of right-hand-drive Model 3 for Great Britain has been sighted. It arrived at the port of Dover and was transported to London by car transporter. The first deliveries of the Tesla Model 3 in Great Britain are scheduled to be sent out to customers beginning later this week.