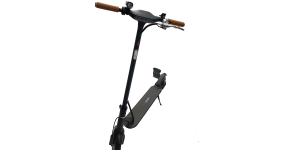 A Twitter account has surfaced covering the proliferation of electric kick scooters in Chicago which seem to mainly find parking in most unusual places. Think trees or bins to start with.

When asked about his unusual platform in an interview, the creator said: “There’s probably a better way of going about it than dropping vehicles around a busy city that can go 15 mph for a lot of people who’ve had no training in riding them.”

Spider-Man and e-tron team up