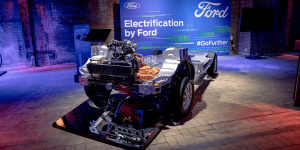 Ford is bundling the development for European passenger cars, including battery electric models, in the German area of Cologne-Merkenich and will produce a future “family of battery electric vehicles” in Europe.

The US carmaker made the announcement in a press release on the restructuring of their operations in Europe. The plan is to cut around 12,000 jobs by the end of 2020 and close or sell six production and component plants. From the 1 July this year, Ford Europe will restructure itself into the divisions Passenger Cars, Commercial Vehicles and Import Models.

“Ford will be a more targeted business in Europe, consistent with the company’s global redesign, generating higher returns through our focus on customer needs and a lean structure,” said Stuart Rowley, president, Ford of Europe. “Implementing our new strategy quickly enables us to invest and grow our leading commercial vehicle business and provide customers with more electrified vehicles, SUVs, exciting performance derivatives and iconic imported models.”

When presenting the company’s electrification strategy for Europe back in April this year, Ford almost exclusively cited hybrids for its electrified models. Now it seems that the Mustang-styled SUV promised for 2020 and the Electric Transit in 2021 should be fully electric exceptions.

According to this latest press release, Ford is now talking about a whole family of purely electric vehicles, although no further details were given. In the new organisational structure, different business units are responsible for the purely electric models. Ford claims that the three new business groups will have separate structures and leaders for marketing, manufacturing and product development. For example, Ford’s electric Transit will be managed by Commercial Vehicles, while the battery-powered SUV inspired by the Mustang, is an import model. The Passenger Cars division is responsible for the electric cars developed in Cologne. The Commercial Vehicles group will be led by general manager Hans Schep and based at the company’s centre of excellence in Dunton, U.K.

Even though not all details are clear yet and Ford has given little indication of how the three divisions will develop, Ford Europe boss Stuart Rowley is clear about the basic direction: “Our future is rooted in electrification”.

Opel to build an Astra PHEV