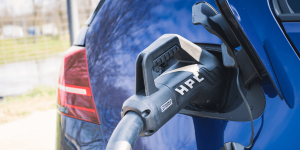 Ultra-fast EV charging provider Ionity has continued its British expansion by penning a deal with Extra MSA Group, which owns and operates parts of the UK’s motorway network.

Under the deal, the joint venture between automotive giants Daimler, Ford, BMW and Volkswagen, will install its high power charging technology at eight MSA-owned service stations on UK motorways.

The service stations will be those under MSA’s ‘Extra’ brand, and each site will initially comprise six 350kW chargers supplied by Ionity.

The first HPC station is to be installed at Extra’s new location on junction 45 of the M1 at Leeds Skelton Lake later this year, with other installs coming to Cobham, Cambridge, Beaconsfield, Cullompton, Blackburn, Baldock and Peterborough.

Combined with other partnerships such as with Shell and Motor Fuels Group, Ionity said it was now closing in on its target of developing 40 HPC stations at strategic locations in the UK.

“It is fantastic to have Extra on board, helping us position charging stations at critical locations across the UK Motorway Network,” Marcus Groll, COO at IONITY, said.

The partnership marks the latest step in Ionity’s UK activities, having last month unveiled a deal with Octopus Energy as well. The first HPC charging station is located in Kent as reported.

Ionity’s business model sees the network seeking partnerships with gas stations and other location providers to set up a 400 strong site network of high power charging stations across 23 countries in Europe in the next two years. The joint venture from Audi, BMW, Daimler, Ford, Porsche and Volkswagen is positive to complete the construction of its announced high power charging sites along motorways as planned by the end of next year. Ionity CEO Michael Hajesch claims they had secured contracts for about 95 per cent of the scheduled locations and that rapid progress, as well as expansion, can be expected.

Enel X partners up with Ionity and Smatrics