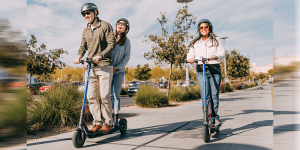 While the electric kick scooters populating the streets of major cities are obviously designed to safely carry one person, it does happen that people do not exactly follow the instructions. The startup BOGO (Buy One Get One) is attempting to address this disparity by offering a new electric kick scooter with an elongated board and a second handlebar for safe tandem use.

Underlining the safety-conscious aspect is co-founder Allegra Steinberg: “The idea resulted from seeing several injuries and accidents caused by two people riding together on a standard single rider electric scooter with only one handlebar.” And while the layout will certainly help balance when two people are on-board, the safety issues tend to stem from improper use and lack of helmets, which is unclear if this is a problem so easily solved.

McLaren 720S as electric car – yet there’s a but

Ein Kommentar zu “Double or Nothing”