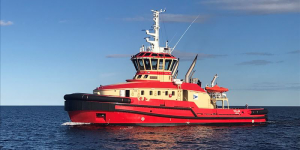 The first ship has gone into operation using the hybrid system HY from the Finnish technology group Wärtsilä. The tug that escorts ships in the Swedish port of Luleå has been equipped with the fully integrated hybrid power module Wärtsilä HY, which includes motors, a battery system and power electronics.

The tug “Vilja” was built at the Gondan shipyard in Spain and delivered at the end of June after extensive testing and trial runs. The Vilja’s Wärtsilä drive was specially developed for tractors and allows, among other things, different operating modes: in “green mode” the tug is purely electric, in “power mode” both drives work together and result in a higher overall performance than a conventional solution of comparable size. In “smoke-free operation”, the electric motor supports the combustion engine so that it can run with a lower load.

“This ship is the most powerful tug with hybrid drive and can be seen as the benchmark for the new era of modern shipping,” says Giulio Tirelli, Director Sales & Business Intelligence at Wärtsilä Marine. However, the company did not provide any technical data on the propulsion system.

In order to meet the requirements of the port operator in Luleå, Wärtsilä collected data over a whole year in the field and adapted the development of the HY drive. In Luleå, the vessel alternates between normal summer operation and working in one-metre thick ice during the winter months. The energy management system had to be designed to meet the tough temperature and performance requirements in the Nordic country. During operation, emissions are to be reduced by about 20 per cent compared to a conventional tugboat.