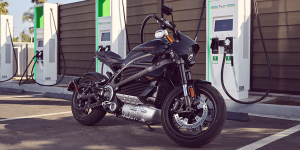 Among other things, the two companies have agreed that LiveWire drivers can charge up to 500 kWh of free electricity from Electrify America’s charging stations – at least for those customers who will buy an electric motorcycle from Harley-Davidson between August 2019 and July 2021.

Electrify America was founded by Volkswagen following the diesel scandal. The aim is to accelerate the introduction of electric cars with a US-wide fast-charging network. Currently, stations are planned in 42 US states. “With an average of 70 miles between each of our charging stations, we are creating a network that is premium, ubiquitous and powerful,” said Giovanni Palazzo, President and CEO of Electrify America, in a statement. “So it makes sense that we would expand that offering to electric motorcycle owners.”

While many electric motorcycles can only be charged with alternating current, the electric Harley will also be fast-charging via DC. In the images of the North American model published so far, the LiveWire has a CCS1 socket. This suggests that the European model will have a CCS2 connector. Harley states the range as 140 miles (225 kilometres) in urban traffic and 88 miles (142 kilometres) in the combined cycle. The acceleration from 0 to 60 mph should be achieved in 3.0 seconds. A full charge takes no more than an hour, says Harley. The battery holds cells from Samsung SDI.

The Harley LiveWire electric motorcycle can also be pre-ordered in Europe since April. The recommended retail price for the LiveWire is £28,995 in the UK, 32,995 euros in Germany and 33,390 Euro in Austria.