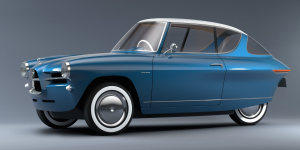 The Nobe 100 can now be pre-ordered. The three-wheeled light-weight electric car with a retro design was first presented by Nobe Cars about a year ago. The Estonian startup is collecting production funds through a crowdfunding campaign on Indiegogo – where the first ten models are also available at a special price.

Weighing in at just 600kg (less than half the weight of the lightest Mini), Nobe cars is focusing on sustainability. The Nobe 100 is the first-ever all-wheel-drive three-wheeled car and the world’s first electric cabrio.

While Nobe Cars was still cautious during the presentation, more technical data and prices can now be found on the Nobe Cars website: The Nobe 100 with a 21-kWh battery has a power output of 54 kW, a range of 210 km and costs 31,000 euros. The 72 kW strong Nobe 100 GT with sliding roof and 25 kWh battery is supposed to have a range of 260 km and costs 40,000 euros. The range is increased by 50 kilometres with a suitcase battery. The Nobe is a “fully upgradable EV” and can receive firmware updates.

The retro lightweight vehicle accelerates to 100 km/h in 5.9 seconds, with a maximum speed of 130 km/h. According to the manufacturer, charging the little electric car should only take two hours. However, exact charging capacities or cable types were not mentioned in the technical data.

For the manufacturers of Nobe, the car’s appeal also lies in the fact that it is “the most sustainable commercially available car on the market,” said Roman Muljar, founder and CEO of Nobe. Not only is the BEV is particularly light, it also has small batteries, and the design ensures every element of the car recyclable.

Nobe not only wants to attract enthusiasts but also, as the company declares, “conscious consumers who want to support a clean future in passenger transport”. The support is meant literally: via the “Indiegogo” platform, the makers want to collect 100,000 dollars by crowdfunding in order to start production, with a minimum investment starting at 20 dollars. The names of the investors are to be immortalised on the body of the first Nobe 100.

Customers can also order one of ten specially priced vehicles in the crowdfunding campaign. The advance sale price of $29,000 (25,800 euros) is well below the later list prices.