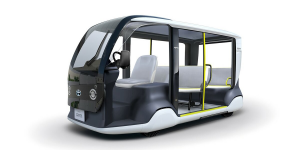 Toyota is developing a dedicated mobility vehicle especially for the Toko Olympic and Paralympic Games 2020. The battery-electric six-seater APM (Accessible People Mover) should bring athletes and officials as well as visitors to the games.

“Accessible” is the keyword here: the passenger area has been flexibly designed to provide inclusive transport, allowing accessibility for the elderly, people with disabilities, pregnant women and families with small children. The vehicle is open to the sides to facilitate boarding and alighting the shuttle. For wheelchair users, the three seats of the second row can be folded up, leaving a sufficiently large area free. Fixing options in the floor increase safety and ramps simplify access.

Despite the recent popularity of self-driving electric shuttles, the APM will not travel autonomously. The driver’s seat at the front is positioned in the middle, slightly raised, so that the driver can see all passengers and also has a better view of the surroundings of the car. The shuttle service should only travel short distances and at low speeds.

In an emergency, the APM can also be used as a rescue vehicle. In this configuration, part of the second row of seats and the entire third row provides space for a stretcher on which people in need of assistance can be transported safely. Two emergency personnel can sit directly next to the stretcher.

In addition to events and competitions, the APM fleet of around 200 vehicles will also be deployed to the Olympic Village and other non-public locations during the Games.