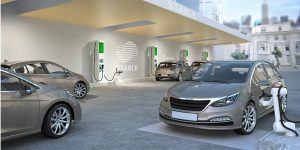 Volkswagen’s US subsidiary Electrify America is working with Stable Auto on charging robot solutions for self-driving electric cars. The first project in California is already planned.

The two companies will launch a pilot programme in San Francisco for charging autonomous electric vehicles without human intervention using a robot connected to a 150 kW fast charger. This charging station will be Stable Auto’s first commercial autonomous charging station and is expected to open in early 2020.

The published graph makes it clear how the system will operate: On the base next to the fast charging column, a robot arm is installed that is very similar to a conventional industrial robot. A charging cable – probably a CCS1 connection at Electrify America – is permanently installed on the arm. The car drives next to the charging arm and opens the charging flap, while the robot does the rest.

Stable manages the entire project and is providing the robot technology. Electrify America supplies the charging hardware and the network and takes care of the operation and billing of the charging systems. When charging autonomous cars, the process must be error-free, because there is no driver who can react to an unaccepted charge card, an incorrectly inserted cable or an error message at the charging station. No employees will man the charging station.

“Autonomous vehicles will play an important role in the future of driving, particularly with fleets, and tailored charging options for self-driving EVs will be critical to develop that effort,” says Wayne Killen, Director of Infrastructure Planning and Business Development for Electrify America.